Bearing witness: The Destruction of the great city of Aleppo, the second oldest city in the world, Part two. 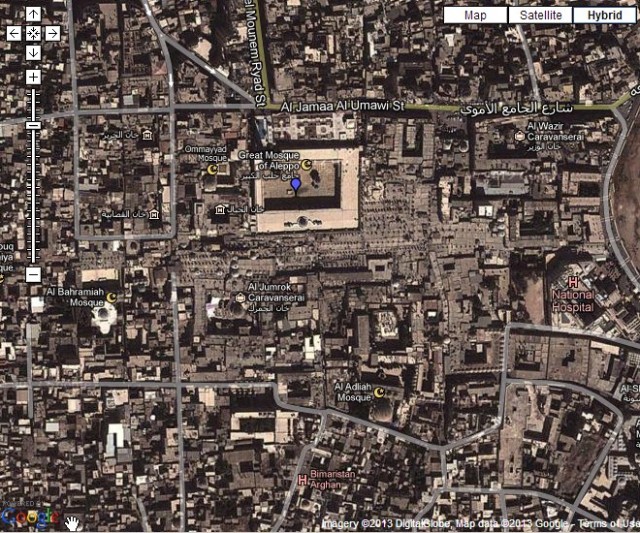 In part two of my documentation of the destruction of the Old City of Aleppo, I would like the viewer to read it in reference to my Part one:

This part of my documentation of the cultural damage to Aleppo will be updated as I receive new information.

Part two lists the main monuments, historical buildings and heritage sites in Aleppo, while marking the damage inflicted upon historical Aleppo, from extremely bad to moderate, in italics and by underlining combined with an asterisk(*) when possible. Images will be used to show, when possible, the state of the monuments before and after. I might have to divide this part into two, using a Part three, if it gets too long. Nobody  is able at the present circumstances to tell or fully document the extent of the terrible damage inflicted upon Aleppo by a regime that respects nothing and believes in nothing but its survival and the rebellious desperate, disparate  opposition which is desperately trying to carve out of the biblical ruin a new destiny for Syria. Therefore what I have marked as damaged or destroyed are the buildings and monuments of which I have seen pictures showing  the damage that has befallen them, or whose  destruction have been authenticated by reliable sources. The actual damage to heritage might be much much worse than we are able to estimate or prove. Many of the old houses in the historic old quarters of the city and these quarters themselves sustained severe damage by artillery fires and bombardment from the government forces  which leveled some of them to the ground. It took a long time and much effort to compile the following information, but I was driven to undertake to do it by the escalation of the conflict and the irretrievable nonredeemable losses of the Syrian people. 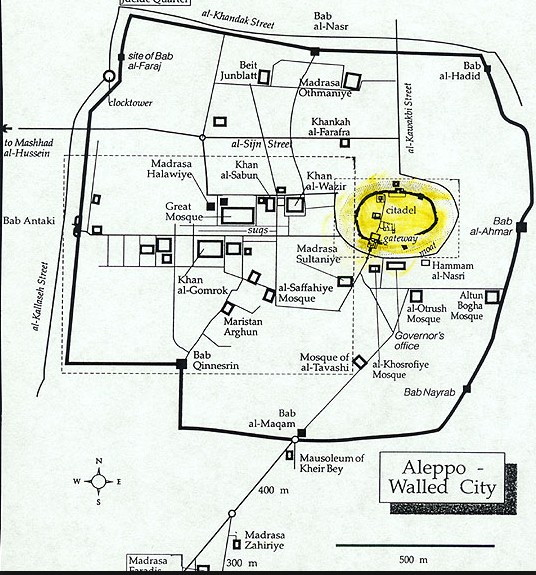 Map of the walled city of Aleppo

Some of the passages in this study are in Arabic because I am too tired to translate. Finally I owe Wikipedia, which has been one of my sources, a lot of gratitude.

The mosques of Aleppo

**The Great Omayyad Mosque built in 715-717 AD. (Jāmi‘ Bani Omayya al-Kabīr), founded c. 715 by Umayyad caliph Walid I and most likely completed by his successor Sulayman. The building contains a tomb associated with Zachary, father of John the Baptist. Construction of the present structure for Nur al-Din commenced in 1158. However, it was damaged during the Mongol invasion of 1260, and was rebuilt. The 45 m-high tower (described as “the principal monument of medieval Syria”)[18] was erected in 1090–1092 under the first Seljuk sultan,Tutush I. It has four façades. (Wikipedia) 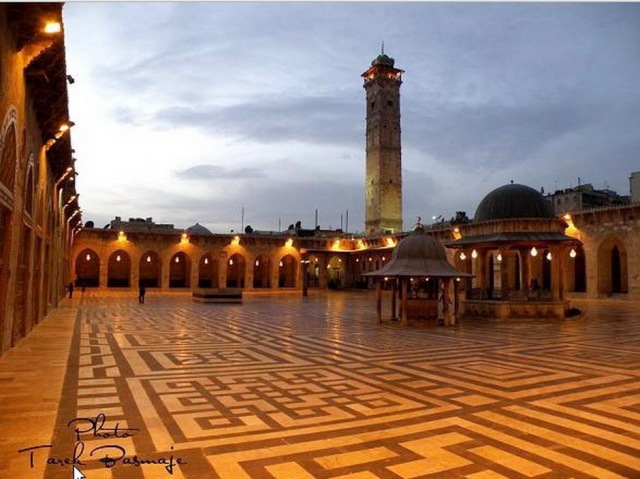 The Great Omayyad Mosque (before destruction)

The Courtyard of the Great Omayyad Mosque before burning. Image by Tarek Basmaje

I tried to document the stages of the damage that was inflicted upon the Great Mosque during the tug of war between the Assadi army and the rebel fighters.

All these skirmishes and attempts at breaking into the Mosque resulted in severe damage to the structure and the interiors which consumed its decorations and ornamentation. The women prayer section of the Mosque was completely destroyed. The Minmbar which was made of carved wood and  inlaid with ivory and precious woods, one of two only of its kind, the second being the restored Minbar (pulpit) in Al-Aqsa Mosque, disappeared. The main gate to the Mosque was damaged and other parts of its walls in the attempts to penetrate it by the fighters. The splendid minaret of the Mosque also sustained considerable damage by shelling and occupation by the army. The beautifully laid courtyard also suffered damage in various parts. 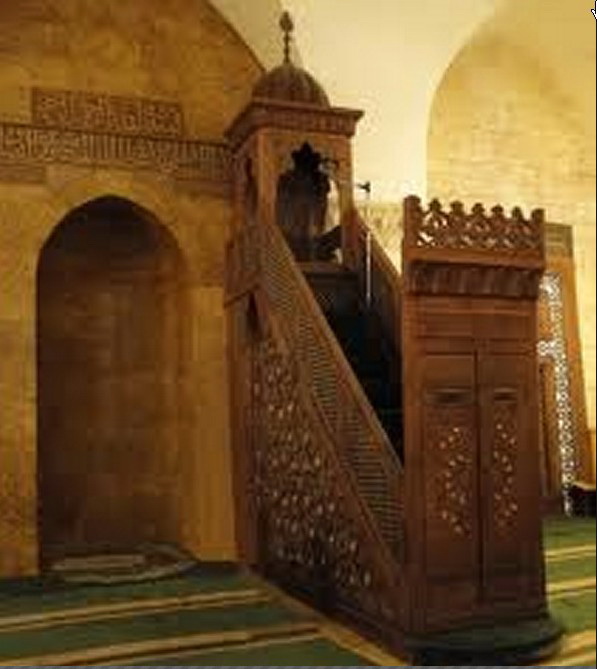 The minbar( pulpit) of the Great Mosque which has reportedly disappeared

The Great Mosque after destruction. Below, up to date image image

Alhalawiya mosque and madrassa before it was damaged by the fighting. Note the rare beautiful carved mihrab. I am hoping against hope that it was not destroyed

A-Halawiya mosque and madrasa after it was

Al-Kamiliya Mosque, details. Have we lost all this loveliness? 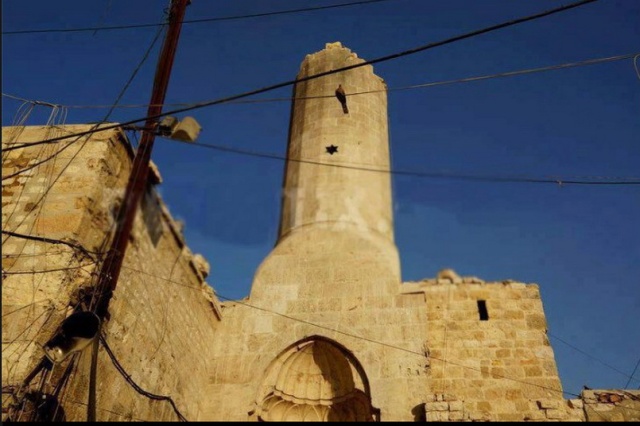 Al-Adiliya Mosque after destruction, what a loss?

The Madrasas  of Aleppo 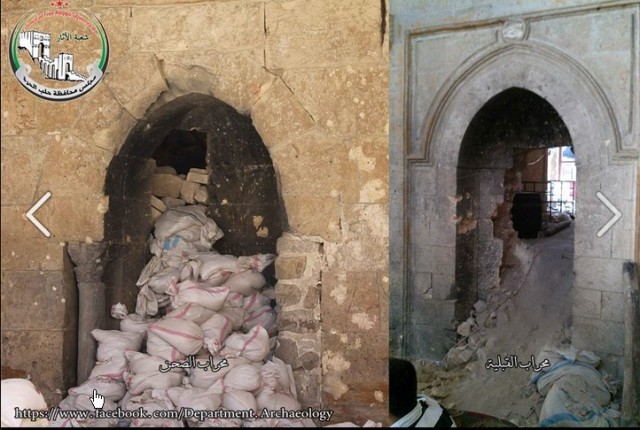 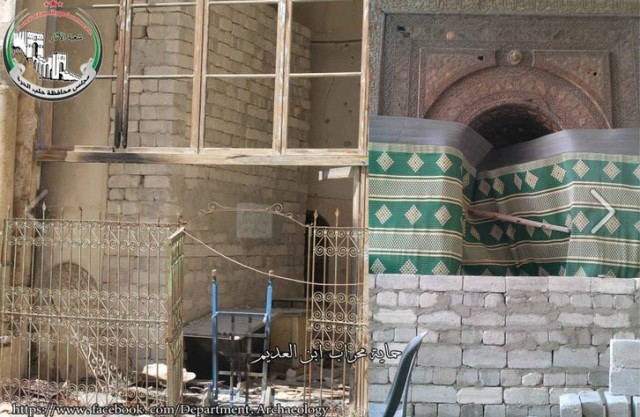 Saving the Minbar of the Madrasa Halawiya

*So far, eighteen  mosques and madrasas were damaged, some very severely, including  some of the most important and beautiful. 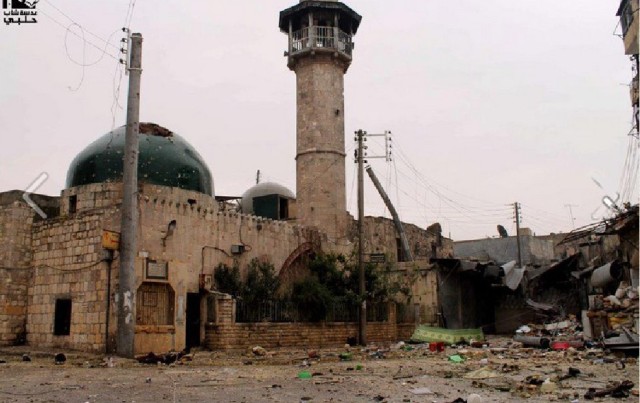 Mosques which have sustained damage by fighting, assembled by Alisar Iram

The splendid inlaid marble mihrab of Al-Faradis madrasa. I hope it was not lost to us as a result of the damage to mosque

It is a large fortress built atop a huge, partially artificial mound rising 50 m above the city, dates back to the first millennium BC. Recent excavations unearthed a temple and 25 statues dating back to the first millennium BC. Many of the current structure dates from the 13th century. The Citadel had been extensively damaged by earthquakes, notably in 1822. Please see my Part One of this study: https://alisariram.wordpress.com/2013/03/27/bearing-witness-i-present-to-you-aleppo-a-city-that-predates-written-history-the-second-oldest-inhabited-city-in-the-world-as-it-was-and-as-it-has-become-after-the-deadly-shadow-of-assad-fell-upon/

Part of the walls of the citadel were damaged by the shelling , while it remains impossible now to assess to damage inside the castle owing to the army occupation of the site and the exchange of fire between them and the rebels. One of the main portals (the outer) of the castle was severely damaged when it was blown up by some of the rebels during the fighting with the regular army. 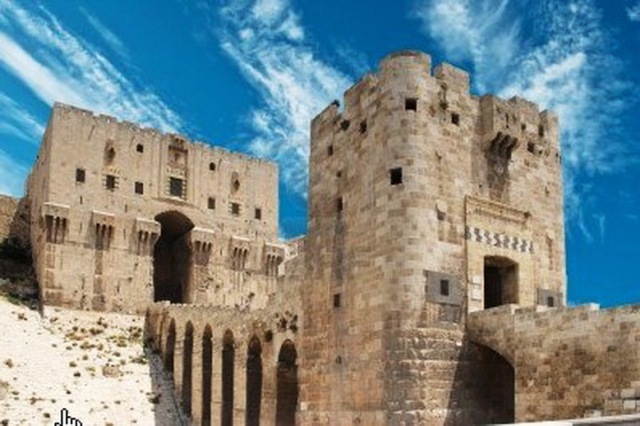 The Citadel of Aleppo 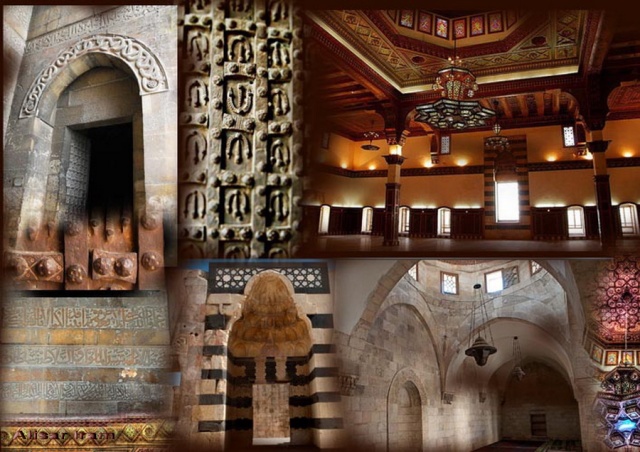 The Citadel of Aleppo, details, assembled by Alisar Iram

The citadel of Aleppo, damage to the walls

The Citadel of Aleppo. damage to the outer portal, the front gate 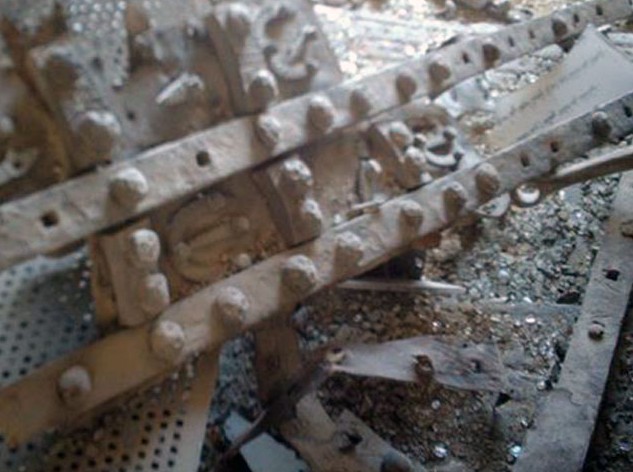 The front gate to the Citadel

The *gate was destroyed when the fighters used explosives in order to penetrate into the Castle.

Other historical sites and Churches

The Dormition of Our Lady   Greek Orthodox church of the 15th century in Jdeydeh.

–   The Central Synagogue of Aleppo or al-Bandara synagogue, completed as early as the 9th century by the efforts of the Jewish community

The most significant historic buildings of Jdeydeh Christian quarter include:[16]

*The Waqfiyya Library of the Great Omayyad Mosque ( All the collection was burnt down when the library was set on fore.

In part three of this documentation, I am going to cover the souks, the khans and the hammams of Aleppo and list the damage caused to them by the bombardment from the skies and the fighting on the ground.

I am indebted for many of my images to:

Thanks to all my other sources of images. I apologize for sometimes being unable to give due credits. Speed is very important during the process of documentation. It might be helpful  to mention  that this  documentation in not profit making.

I am an artist, a writer and a researcher. I know Arabic and English . I am interested in music and art of every description. I like to describe myself as the embodiment of a harmonious marriage between two cultures which I value and treasure.
View all posts by alisariram →
This entry was posted in Aleppo, Alisar's art, Alisar's notes and articles, Art, Destruction, Images, Syrian Archaeology and antiquities, Syrian Heritage and tagged Alisar's notes and articles, destruction, Images. Art, Syrian heritage and antiquities. Bookmark the permalink.

12 Responses to Bearing witness: The Destruction of the great city of Aleppo, the second oldest city in the world, Part two.