Blazing In a configuration

Of rubbish and broken homes

With the white bones of children

Into the nights of nothingness

Into the torched dawns of annihilation

Proclaiming the time of the beast

The undoing of ten thousand years of civilization

I had not thought that death has undone so many

That the earth grows corpses

Cities of smoke and shards of concrete

Forging against the nothing

Sacrilegious sculptures hewn out of terror

What is that sound high in the air

Spearing the stars in their spheres

Through the cascading stardust of blood. 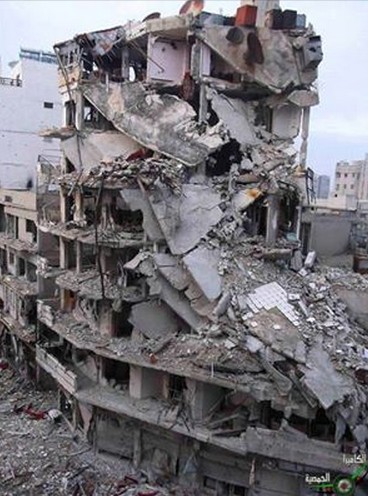 I am an artist, a writer and a researcher. I know Arabic and English . I am interested in music and art of every description. I like to describe myself as the embodiment of a harmonious marriage between two cultures which I value and treasure.
View all posts by alisariram →
This entry was posted in Alisar Iram's art, Alisar Iram's poems, Alisar Iram: art of ruins, Alisar's poems, suffering, Syria, Syrian army, Syrian people and tagged Alisar's art, Alisar's poems, annihilation, destruction, Syria, syrian regime, Video, violence. Bookmark the permalink.