The Office of the Violations Documentation Center in Syria was attacked last night  and ransacked by masked unknown armed men  in Douma, a town in Eastern Ghouta near Damascus, mainly held by Opposition fighters.
Its staff members were abducted and were later seen in chains being loaded into a big car. They included:

The well-known Syrian  human rights lawyer and Opposition activist , Razan Zeitunah
The activist, Wael Hamada, her husband.
The activist, Nazem Al Hamady.
The activist Sameera Al Khalil, wife of the Opposition Syrian writer Yassin Al Haj Saleh, who was imprisoned by the regime in the past for her political activities.
They were taken to an unknown destination.

Please find below a short CV of the lawyer Razan Zaitouneh 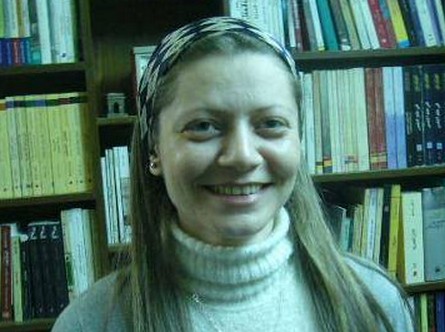 Razan Zaitouneh (Zeitunah) Arabic: رزان زيتونة; born 29 April 1977) is a Syrian human rights lawyer. Actively involved in the Syrian uprising, she has gone into hiding after being accused by the government of being a foreign agent.[1] Her husband has been arrested.[2] Zaitouneh has documented human rights in Syria for the Local Coordination Committees of Syria.[3]
She graduated from law school in 1999 and in 2001 started her work as lawyer. She has been a member of the team of lawyers for defense of political prisoners since 2001. In the same year, Razan was one of the founders of the Human Rights Association in Syria (HRAS). In 2005, Razan Zaitouneh established SHRIL (the Syrian Human Rights Information Link), through which she continues to report about human rights violations in Syria. Since 2005, Razan Zaitouneh is also an active member of the Committee to Support Families of Political Prisoners in Syria.
On 27 October 2011, she was awarded the 2011 Sakharov Prize jointly with four other Arabs.[4] She was previously awarded the Anna Politkovskaya award by Reach All Women in War.[5] In 2013 Razan Zaitouneh was granted with the International Women of Courage Award.

Please campaign on their behalf and call for their release.

The message  of Razan Zaitouneh on the occasion of the International Day of Human Rights, 10,12, 2013

I am an artist, a writer and a researcher. I know Arabic and English . I am interested in music and art of every description. I like to describe myself as the embodiment of a harmonious marriage between two cultures which I value and treasure.
View all posts by alisariram →
This entry was posted in Abduction, Activism, Douma, Eastern Ghouta, Razan Zaitounah, Syria, Syrian Revolution, The Ghouta of Damascus, Violations Documentation Center in Syria and tagged Abduction, Activism, Armed group, Douma, Eastern Ghouta, Human Rights, Razan Zaitounah, Syria, Syrian Revolution, Violations Documentation Center in Syria. Bookmark the permalink.