The Rose and the Nightingale

The Rose and the Nightingale

The bells do Toll

But the missing beat is the one

Ringing in my heart.

My heart has become

Not the pasture of gazelles,**

No, not a temple or a mosque or a cathedral**

For it has become a galaxy,

Where love treads and threads,

Dyeing the stars with the splendour

Of the red rose.

Must the nightingale die

Shine in the night of the universe ?

With the plaintive beat of the Sufi ney,

Yet the beat that is missing is ringing in my heart

Where the nightingale is singing its farewell.

This pain is but the thorns and briars of roses

And I was wounded but by a rose,

This pain is but for the rose.

This pain is but of the rose

The wild the beautiful red star,

Whispers the nightingale as it presses its soft breast

Closer and closer to the crimson glory of the rose.

I have stretched my soul across the universe

And plucked then plucked again,

Chants the nightingale while its melody rises to revolve

Round the whirling stars.

As the bell dies down,

As its song rings its final notes,

As the bells stop tolling

And the missed beat in my heart also stops stops,

The nightingale becomes the rose

Soul of its soul.

How would you know in the magnificent glow of red, 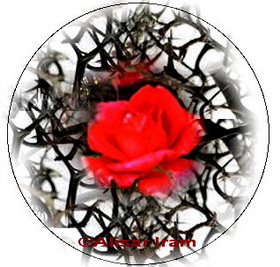 * Reference to Jhne Donne. See below

** Referenced to Ibn Arabi. See below

The rose is a sacred symbol found throughout the mystical writings and poetry of many religions. There are many Sufi references to the rose, as symbolizing the Divine beloved, to whom the earthy lover might become  a conduit, channeling divine love.  The sacred and the profane, the heavenly and the earthly become indistinguishable. Ibn Arabi, the Sufi mystics and some great Persian poets used the image profusely in their poetry.

As for representing the human soul by a bird, it is found in myth and mystical literature all over the world. The old Arabians thought of the soul as an owl or a bird leaving the body from the head as death occurred. The image of the bird, as a metaphor for the soul yearning for the beloved,  was repeatedly used in Arab and Islamic mysticism and poetry and in Persian literature. The nightingale, because of its haunting melodies,  became the lover who is in love with the rose, the Divine. As poetry is always very complex and multi-layered, the image gains in profundity and meaning according to the poet‘s vision.

My two direct sources of inspiration in this poem are two great mystics of Islam and Christianity, the great  Arab Medieval poet and mystic, Ibn Arabi ( 1156- 1240), and the great English Metaphysical poet, John Donne (1572-1631).

My heart has now become recipient to all images

As it has turned into the grazing fields where gazelles play,

And into the monasteries where the monks pray, …

For I have embraced the creed of love, wherever it fares;

Love is my religion and love is my faith.   (Ibn Arabi)

The tolling of the bell in the poem is the bell tolling in Donne’s poem:

No man is an island,

Each is a piece of the continent,

A part of the main…

Each man’s death diminishes me,

For I am involved in mankind

Therefore, send not to know

For whom the bell tolls,

It tolls for thee.  (John Donne)