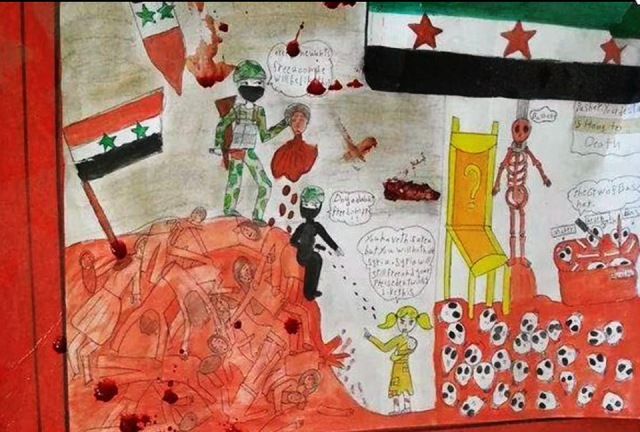 The painting: war in Syria through the eye of a child

Her name is Nouran Sebsby

Pictures from an exhibition

Another painting from the Ein Jalout school in Aleppo

In a school in Aleppo the teachers thought to offer the war children some relief and the chance to express their feelings about the war in their own drawings and paintings. So they arranged an exhibition for them in the courtyard of the school.  But on that deadly day of 30 April, 2014, the army of Basar Al-Assad had plans of their own. The school was hit by a missile which reduced it to rubble, killing more than 17 children and some adults, and injuring many others, most of whom are in critical conditions. 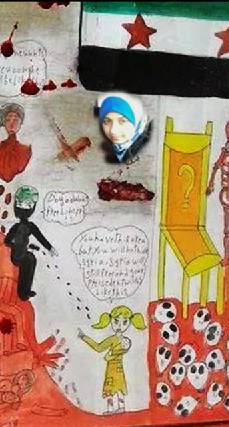 She is in the picture now

Nouran Sebsby was one of the children who took part in the exhibition. I saw her painting spattered with blood, being shown on Facebook before I knew she was among the dead children. I gazed at the picture spellbound, horrified. The terror of a child’s clear, instinctive, devastating and piercing vision of the war held me in its grip. So young yet so prophetic and so old, old with the burden of death and blood. When I knew she died in the missile strike, I kept looking at her painting, at the blood which has put the finishing touches to it, blood that might have been her blood. The childNouran saw her own death before it happened and wrote with the brush her own epitaph. Good night Nouran. May the stars shine upon you. I shall say no more. ©Alisar Iram

هل يمكن البحث عن لوحة نوران والاحتفاظ بها لعلها تكون نواة لمجموعة فنية من اعمال اطفال سوريا نحتفظ بها بمتحف يخلد اطفال الثورة نبنيه في سوريا الجديدة
A friend of mine suggested we try to keep the painting by Nouran Sebsby who died with her friends on the morning of a school exhibition she took part in at Ein Jalout school in Aleppo. She thinks and I agree that it could mark the start of a collection of children art in a museum we dedicate to the children of Syria in the new Syria
PS 2
The children in the  school of the neighborhood of Salah Al Deen, next door, mounted a protest in memory of the murder of Ein Jalut students. The children now in Aleppo paint death, play games of death, yet they know instinctively that it is too early for death to visit them.

I am an artist, a writer and a researcher. I know Arabic and English . I am interested in music and art of every description. I like to describe myself as the embodiment of a harmonious marriage between two cultures which I value and treasure.
View all posts by alisariram →
This entry was posted in Aleppo, Alisar's notes and aerticles, Children of Syria, Ein Jalout School in Aleppo, Images, Syria, Syrian army, Syrian Children's art, Victims, Video and tagged Aleppo, Alisar's notes and articles, Children of Syria, children's art, crime against humanity, Missile strike, Syria, Victims. Bookmark the permalink.