Posted on November 8, 2013by alisariram
Reposted in support of the Save Aleppo Campaign:#savealeppo
https://www.facebook.com/hashtag/savealeppo?source=feed_text&story_id=620138741412888
(The following images are digital works of art based on pictures of the destruction of Old Aleppo)

All that destroys life and innocence is my enemy. All that unmakes, all that reduces into nothingness or annihilates and obliterates, is my foe and my slayer.  All that negates existence or smothers the life forces of man and nature, is my eternal adversary and my everlasting opponent. If you are a maker, if you shape things out of formlessness, willing them to take shape, imagining them into being, slaving to bring them to life, you come to realize that that which is made by the collective efforts of millions of people over thousands of years is sacred and is flesh of our flesh, and you come to recognize too that the ancient stones are not only tourist attractions,  but like our bones, they are embedded in the very structure and texture of our lives. I tell you my friends that each time a monument burns and is desecrated by the jackals, that each time a manuscript is consumed by the flames or an intricately designed lofty dome collapses  under the impact of shelling and bombardment, I feel diminished, I feel that part of my continent and your continent is gone for ever. What have they done…what have they done? 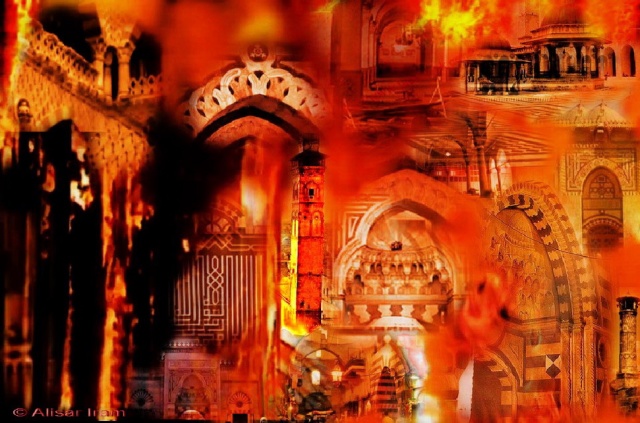 The Madina Souk with its architectural landmarks, its Khans, mosques and madrasas

The great medieval Madina Souk of Aleppo burns: digital image constructed of several images of the souk by Alisar Iram

The destruction of the great beautiful architecture of Aleppo, the labour and legacy of hundreds of years: digital images constructed of several images by Alisar Iram

My impression of the destruction of the Madina Souk created by juxtaposing glimpses of what was and the gaping scorched wounds, inflicted by the war of Assad on his people and their civilization 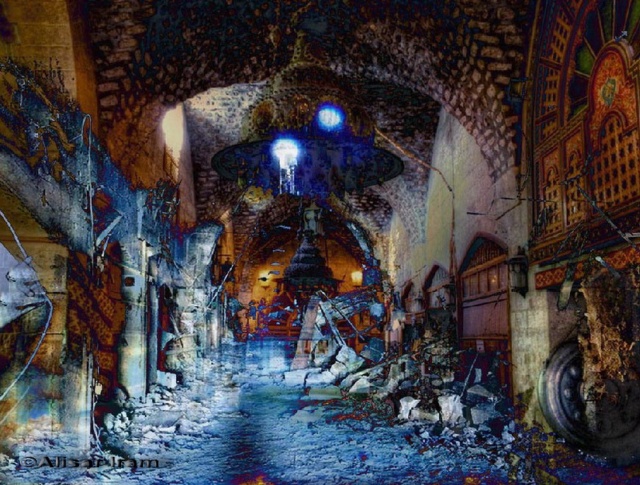 In this image I am registering in the same image the death of one of the most beautiful architectural gems of the Madina souk, bringing the past into a present of desolation, destruction and devastation.

The Great Omayyad Mosque of Aleppo

The destruction of the Great Omayyad Mosque of Aleppo, dating back to the beginning of the eighth century, devastated me greatly and the anguish of its loss still stays with me. I have spent hours researching it and collecting all the images I could find.  It became an obsession of mine to hold on to it in my imagination and not let go. Its majestic simplicity and purity of lines, only broken here and there by splendid calligraphy and refined ornamentation, the marvelous exquisite beauty of its inlaid minbar, a masterpiece of arabesque and geometric art  and the lovely symmetry and design of its vast courtyard, not to mention its great superb minaret, displaying the consummate  craftsmanship and accumulated skills of the master builders of Aleppo has lived in my mind as one of the great monuments of Arab Islamic art and architecture. Therefore I am still mourning the passing of  an incomparable architectural and historic treasure.

What is left of the Great Omayyad Mosque: digital image by Alisar Iram

It is hard to tell what has survived of the inlaid ornamentation which decorated the arches and the walls or framed the doors and windows. The Mosque was set on fore, bombed, shelled and vandalized.

The great minaret of the Great Omayyad Mosque is nothing now but a heap of broken lime stone, shattered beyond redemption.  In this digital image I have chosen some architectural and ornamental  features of the toppled minaret 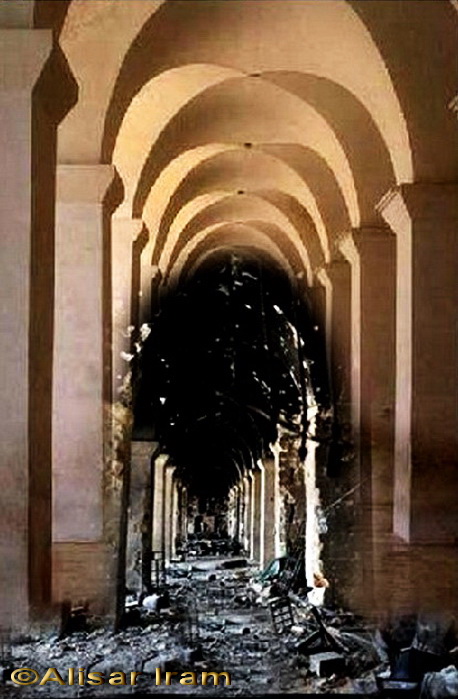 For further  detailed information about the destruction of the monuments and architecture of  old Aleppo mostly by booming and artillery shelling by the Syrian army and air force, please see the following links: https://alisariram.wordpress.com/bearing-witness-i-present-to-you-aleppo-a-city-that-predates-written-history-the-second-oldest-inhabited-city-in-the-world-as-it-was-and-as-it-has-become-after-the-deadly-shadow-of-destruction-and/

Occasionally, some of your visitors may see an advertisement here.

Tell me more | Dismiss this message