My love for ceramics and my experiments with glazes opened the way for me to the world of glass. Its advantage over glazed pottery lies in its transparency and the alchemy of light it becomes a vehicle to. A glazed pot is covered with a thin layer of glass which at high temperature fuses completely with the clay as it becomes vitreous like in the case of Porcelain. Glass sculptures are three dimensional as well, but light adds another dimension to them, that of the magic of transparent luminosity.

Making a glass sculpture, I usually began with clay, forming the shape.That was followed by making a plaster and flint mould around the clay template, then gouging the clay out in order to reveal its impression stamped in the plaster. The last process was to place lumps of coloured  crystal glass in the mould and hope for the best!  My experience with painting allowed me to control the colours even though they were going to become a pool of molten glass in the kiln. It remained a mystery to my fiends how I was able to control the molten glass. After firing which took a considerable time at the workshop where I worked, the mould was left to cool down slowly. After extraction, the pieces were cleaned and washed vigorously, then polished, but this is another story !

The Road to Damascus is a triptych made in celebration of Damascus. The design is inspired by the mosaic friezes covering some of the walls of the Omayyad Mosque in Damascus. The central piece reflects some of the architectural styles Damascus nurtured or inspired.

Damascus is credited as being the oldest city in the world. It does not only have seven gates but it has underneath it about seven layers of civilizations, the top of which is the Arabic Islamic, resting astride the Byzantine and the  Roman, the Greek, The Aramaic, the Amorite and others . 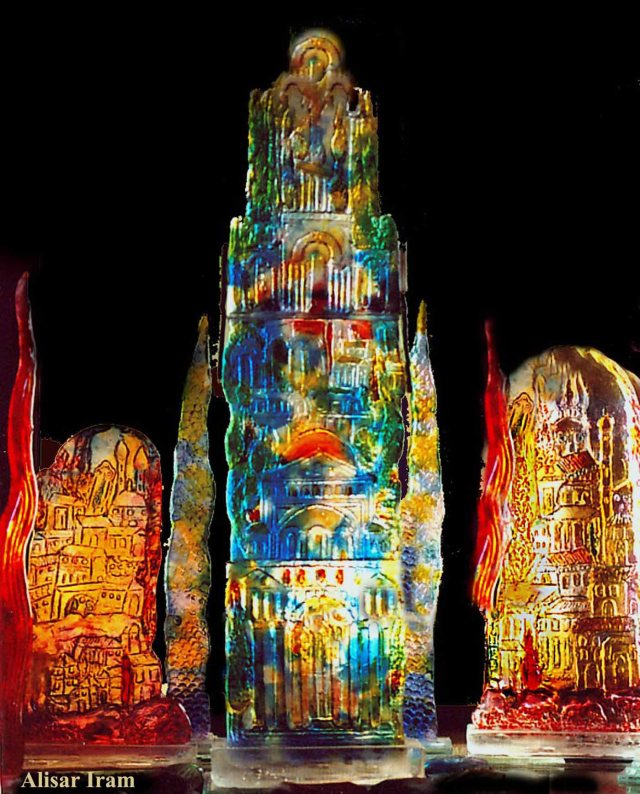 Occasionally, some of your visit

I am an artist, a writer and a researcher. I know Arabic and English . I am interested in music and art of every description. I like to describe myself as the embodiment of a harmonious marriage between two cultures which I value and treasure.
View all posts by alisariram →
This entry was posted in Alisar's art, Art, Damascus, Images, Syria and tagged Images, Images. Art. Bookmark the permalink.

1 Response to The Road to Damascus الطريق الى دمشق